Today was one of those days where you wake up and just know deep down inside that you're going to spend the day running around like a chicken with it's head cut off. I started panicking in the shower when I realized I would only have 30 minutes to throw a reasonable dinner together before heading to work. (I work swing shifts.) Luckily, I remembered that I'd put a couple of sirloins in the fridge to thaw last night, so having a good protein wasn't an issue. After short shouting session to Kenny, a pot of potatoes was boiling away for a rustic steakhouse inspired dinner while I finished getting ready for work.

There's a lot to be said about cooking a good steak (or even a bad one). There are so many factors like cut and marbling to consider. Combine that with a slew of myths, tips, old wives tales, and cautionary kitchen nightmares, and it's no wonder that cooking even a simple sirloin can seem like an insurmountable task fraught with peril. I don't want to overwhelm you and scare you off indefinitely (although some minor trauma should be fine), so here are a few simple tips that I've learned about my favorite meat middle class meat, the sirloin.

Sirloin is is the middle class neighbor of the Rib and Short Loins. (For those of you Las Vegans reading this, think The Lakes or Green Valley.) This means that it's both tender and flavorful, and is considerably cheaper than it's high rise neighbors, the T-bone and Porterhouse. 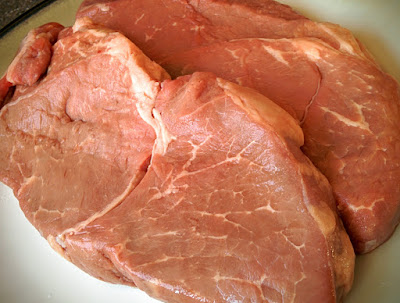 As with most meats, it's a good idea to let a sirloin rest at room temperature for at least 15-30 minutes. This takes some of the chill of the refrigerator off the meat enabling it to heat more evenly when you're cooking it. 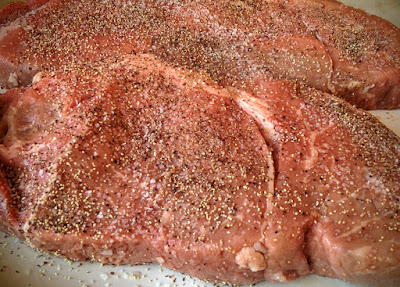 Every chef is different when it comes to seasoning their steaks. Some will season before cooking while others say that this practice changes the integrity of the meat and make it harder to brown because the salt draws moisture out of the meat. Personally, I like to use more pepper than salt anyways, so I like to season them right before throwing them under the broiler. 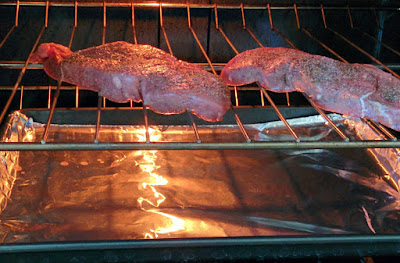 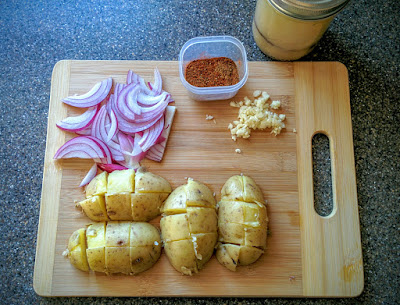 While the steaks were cooking, I got started on the home fries. Now, typically you should really use cold, boiled potatoes because they hold their shape better than going straight from the pot to the pan. Since I was rushed to get to work, I opted to forgo the cooling period. 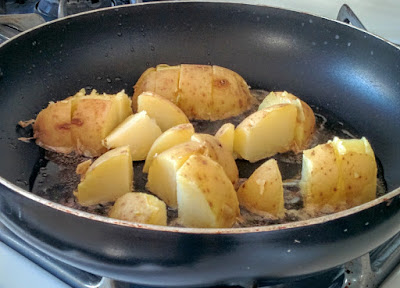 It's better to brown the potatoes for about 10 minutes before adding the rest of the ingredients since they'll take a little longer to brown than the garlic and onions. The type of onions you decide to use are up to you. I prefer Sweet Vidalias in this recipe, but in a pinch, like today, I've used red or yellow. 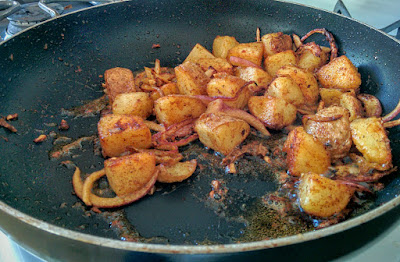 Toss the potatoes with the spices, garlic, and onions for another 5 minutes until the outside of the potatoes are crispy and the onions and garlic are tender.

At this point, you can serve the steaks plain with the potatoes and a nice salad. Or, if you have the time and are feeling adventurous, you can try a this Jack Daniels sauce. I find that the vanilla toffee flavor of the Jack Daniels (which is a Bourbon by the way) combines well with the rich, creamy flavor of the goat's cheese.

In a skillet set over medium high heat, combine the pan drippings, beef broth, and whiskey. Bring to a boil, then reduce to a simmer until the liquid has reduced to nearly half (or thick enough to coat the back of a spoon). Whisk in the cheese until melted and smooth. Season to taste with salt and pepper. Spoon over your steaks and enjoy!

Zesty Home Fries
You Will Need:

Heat the 2 tbsp bacon fat in a heavy-bottomed skillet over medium-high heat. Add potatoes and cook, stirring occasionally, until they begin to form a nice brown crust.

Add the remaining bacon fat, onions, garlic, and spices. Cook, stirring and scraping the pan often, until the potatoes have a nice golden crust and the onions and garlic are tender. For cold potatoes, this can take 15-20 minutes.