It's been a long week for me. It's only Wednesday, but I already feel like the weekend is never going to get here. I know everyone wants the weekends to come fast, but this weekend, Charisma and I are starting our container garden on the balcony. I'm extra excited to try out growing my own herbs, tomatoes, and lemons. At the same time, I'm a little anxious as to whether I have a green or black thumb. I do have a little hope since my parsley is still thriving in the window seal.

I'm hoping having some of my own plants on hand will help alleviate some of the stress I feel between paydays to come up with great meals. (I really ought to start meal planning, but really "Ain't nobody got time for that.") I admit it is kind of exciting (albeit a health inspector's worst nightmare) making meals based on random foods that I find lurking in the back of my fridge or freezer, but I'm pretty sure someone in the house (*cough Kenny) is going to catch on that I'm not properly planning our food budget and lodge a complaint sooner or later. Which is how I came up with today's breakfast. 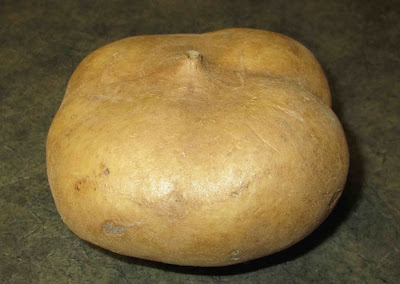 I'm not sure where this jicama came from or what on earth possessed me to purchase it. I'm starting to think that Paleo makes you do crazy things and maybe I thought it was a really lumpy potato when the cravings hit me. I do know I hadn't the slightest idea what to do with it. Good news is that jicama is a root vegetable that I discovered can often be substituted for potatoes (Hah! the potato comparison wasn't stupid). I've been craving breakfast potatoes, so I was pretty willing to take a chance. So I fried that baby up with some chorizo and sweet eggs. 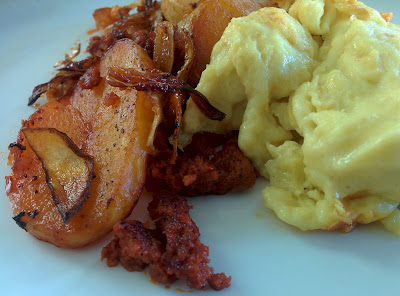 Fun fact about jicama. You really should peel it before you eat it. The skin is really thick and tough and tastes terrible. I did discover that like a potato you can pull the skin of the jicama after you boil it. Just don't cut it up before you boil it. 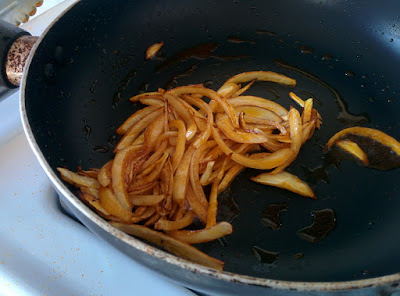 Make sure you saute the onions until their golden brown. I actually fried these up in the fat left behind by some chorizo that I had fried up for a different recipe. 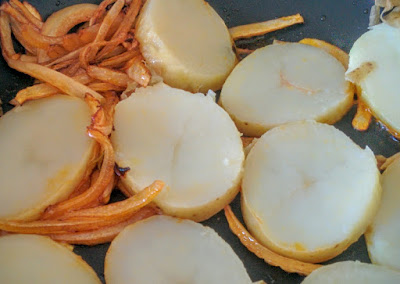 Lay the jicama slices in a single layer with the onions in the pan. To answer your burning question, "Yes, you will need a big pan." Brown evenly by turning every minute or so. 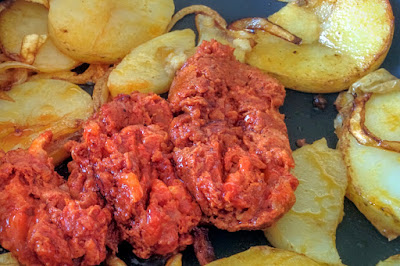 Lay the sausage in the center of the pan and slowly break it up with your spatula or wooden spoon. I know it's hard but resist the urge to just start stirring, scraping and tossing away. Jicama is a fragile young soul and has the tendency to break apart fairly easily.

Heat the oil in a skillet over medium high heat. Brown the onions until they're golden but not burned. Layer your jicama among the onions and fry turning every minute or so until golden on both sides. Add the sausage and slowly turn and break apart until the sausage is cooked through, about 5 minutes.

In a blender, combine eggs, almond milk, cinnamon, nutmeg, honey, and cornstarch until nice and frothy, about 2 minutes. Melt butter in a skillet over high heat. Add the egg mixture and shake the pan constantly until the eggs have set, about 1 minute.**

*If you're feeling adventurous, venture down the international cuisine aisle of your favorite grocery store and pick up some annatto seeds. You can toss a couple into your oil to infuse it with kind of a nutty, sweet, peppery flavor and a really awesome color.
**Alton Brown had this really cool video on Facebook (I shared it here) that demonstrates how to do this. That man is my spirit animal!