All By Myself (with Rice)!

Since I was a kid, rice has always been a staple at the dinner table. I've seen more fights at the dinner table over who's getting the last of the rice than they have on most reality TV shows. We eat it with everything. Having eggs and bacon? Better get some rice. You made chili and cornbread? Where's the rice? 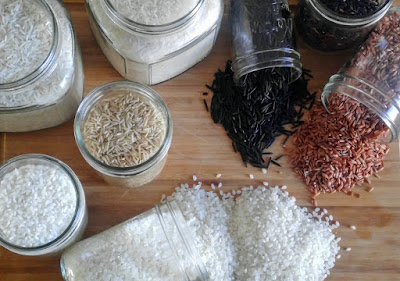 Before I get into the nitty gritty, I want all of you to know that each rice was cooked on the stove in plain water with absolutely no salt or added flavors. (This was unfortunate in some cases as they really needed it. Be brave, dear reader!) Each rice was tried on it's own as well as with a pork chop rubbed in Brown Sugar Bourbon rub and fried.

Arborio Rice
This Italian short-grained rice made it's claim to fame because of it's starring role in Risotto. It's a dish that seems to grace every sit down restaurant menu whether it belongs there or not, but that's a rant for another time. Arborio rice is perfect for risotto because of it's creamy mouth feel and firm, chewy texture. And trust me, it really needs all the attention and flavor that it gets. 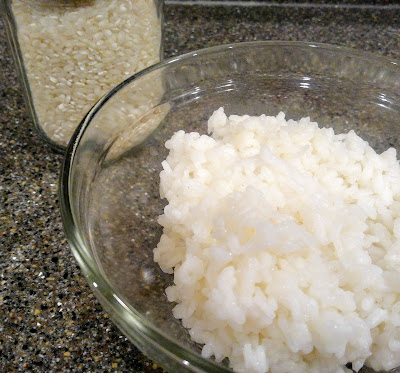 
Tasting Notes
It feels very creamy on the tongue, which really makes it surprising when you bite down and it's chewy. In fact, it's almost crunchy for a rice. On the downside, this stuff is blander than tofu. No wonder they use it in Risotto. It needs all the butter, cheese, chicken broth, salt, garlic and company it can freaking get. I was so disappointed by how bland this stuff was. There is no tasty fish here. Only poison that needs a flavor antidote. (Good thing I had that pork chop!)

Basmati Rice
Let me preface this by saying, I love Basmati rice! Indian food. Mediterranean food. Persian food. Every time I've had it it's been a good time. Downside is all of these cuisines have very distinct flavor profiles, so I have no idea whether the complement the rice or the rice complements them. 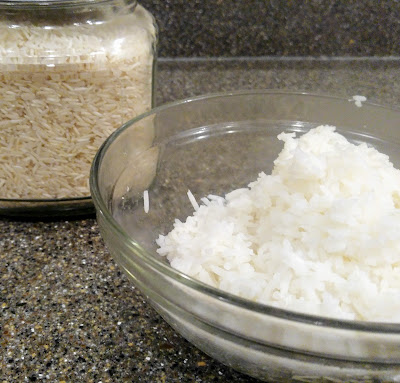 A few things about cooking Basmati rice:
Tasting Notes
First impression is this stuff smells amazing. Just fluffing it with a fork made my mouth start watering. Most of the time restaurants tend to toss herbs into the rice, but the smell coming out of the pot tells me that it doesn't need it. Also, I could tell that it's light and fluffy without even putting a bite into my mouth. The flavor was lightly nutty, and the texture was great. I can really see what all the fuss is about!

Black Rice (or Forbidden)
Who doesn't want something that's forbidden? (See Eve.) This stuff is so forbidden that it's black just so you get the point. Just kidding. Turns out black rice was so rare that was considered superior to all other rices and only Chinese royalty was allowed to eat it. (More likely, it was just the "in" thing at the time.) It seems that the emperor had the right idea as black rice has been linked to a number of positive health effects. (See NPR.) I've never eaten this until now, so let's take a ride. 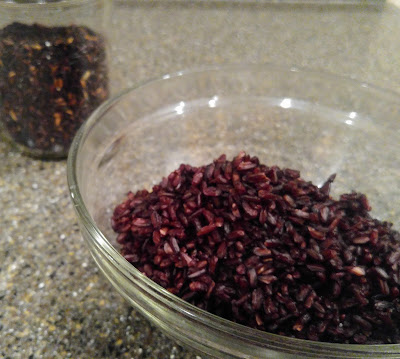 A few things about cooking black rice:
Tasting Notes
There is an aroma here that I can't quite put my finger on. It's almost reminiscent to black licorice. It certainly made the tip of my tongue numb a little like black licorice does. (Note: this could just be me, so don't shy away because of this.) There is a sweet flavor and chewy texture. I can safely say this is one that I could eat all by itself or with maybe some sweetened meats.

Jasmine Rice
I've been eating this rice with everything religiously for at least the last three years of my life. The smell of Jasmine rice cooking makes me happy. 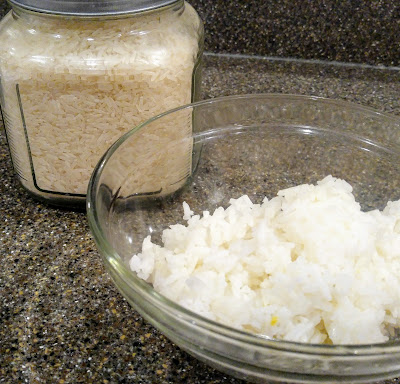 Red Wehani
Alright, fashionistas! Get out your designer shades and Armani handbags! Your rice is here. Red Wehani is a designer brown rice developed from Basmati seeds. (It's also trademarked.) It looks like wild rice and smells like roasting peanuts minus all the sugar. It's also new to me. 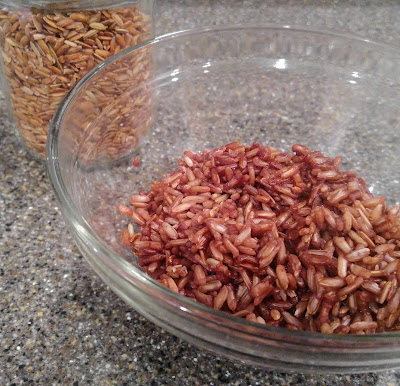 A few things about cooking Red Wehani:
Tasting Notes
There is a weird, grassy flavor. (It made me think of that time I ate it playing soccer and came up with a mouthful of lawn clippings.) I didn't get any nuttiness, which is disappointing because it smelled like roasting nuts. It was also pretty grainy, even after cooking for almost an hour and a half. This stuff hates pork. I think it needs to be stuffed inside something and cooked that way. (Who thought this was a good idea? Have they even tasted this?)

This is it! The most over-hyped rice ever to grace planet Earth. It's not even actually from the rice family. It's like a third cousin twice removed and disowned just to be sure. There are those that would argue that it's better than rice because it has a higher protein content and no gluten. Maybe so, but I'd argue it's only rice in the philosophical sense. Still, we call it rice, so I gave it a whirl. 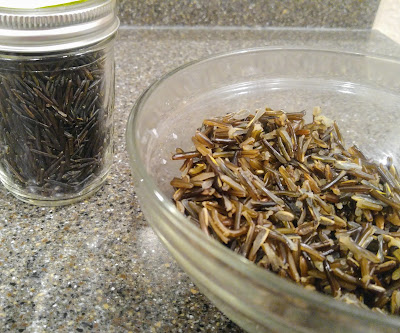 A lot of things about cooking wild rice:


Tasting Notes
I can't believe I cooked this for an hour and it's still crunchy when I bite down. I thought it was supposed to be "chewy." I'm not getting nuttiness. I'm getting grassy but not nutty. (Although after eating all of this rice, I may be going nuts.)