I'm obsessed with Indian cuisine. To me, it's rich and exotic. There are so many flavors that come together that when I close my eyes and breath in deep I can see smells. I've eaten different variations of Biryani at many different restaurants and they're never the same way. I love how each recipe is different depending on so many factors from region to religion to cooking style. Talk about diversity. Wow!

I've never made Biryani myself. Mainly because every single recipe I've looked at is about as long as my daily to do list that I like to ignore, and trust me, it's long. To the average cook like me that spends their days panicking about dinner, ain't nobody got time for that. But since this year is all about discovery, I gave myself no choice but to give this recipe a good old college try.

Where do I begin? So a long time ago, when I was but a babe, I bought this book with the intention of trying to cook foods that I would never dream of making in my wildest daydreams. Needless to say, it's been sitting on my bookshelf occasionally being dusted off and flipped through before I put it back telling myself there is no way. This book told me exactly why people are afraid of Indian cooking. There are so many ingredients that half the time I never make it to the directions before tossing my hands up and ordering takeout. Not today though. Today, I was a brave little soldier working to earn my Starbucks later.


The recipe in this book is actually for Chicken and Potatoes. I wasn't really feeling either, so I altered it to use beef and tomatoes instead. I decided to actually do some mise en place (prep work) for this recipe rather than flying by the seat of my pants getting ingredients in the pot. Let me tell you, O Best Beloved, it was a life saver! 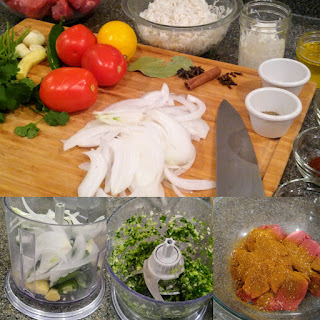 Make sure you soak the rice for at least 30 minutes before you go to cook it. I've noticed it helps the rice to flower and really soak up the flavors from the spices. 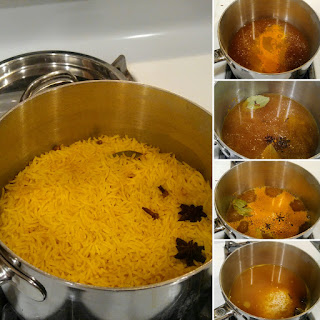 I'm going to tell you now, the original recipe called for two fresh green chilies. No specific type of chili pepper. So, I decided to use the Serrano chilies that I seem to have an overabundance of lately, and I cut it back to one since it was too big. I still used too much. My mouth was on fire from the meat! Apparently, I should have used Thai chilies (Thank You, Saveur!) Let that be a lesson to you kids. When you're trying a new recipe, it's best to do a little research if you have no idea what it's talking about. Save your mouth! 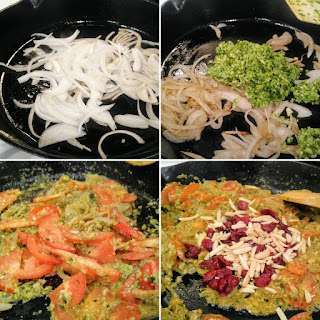 This was the point where everything got easy. It was just a matter of tossing in ingredients and sauteing, which I must say is my specialty. 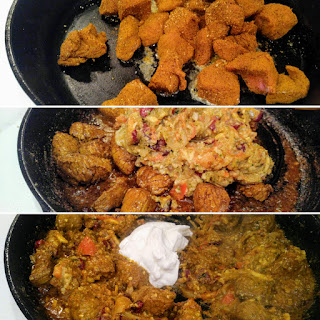 For those of you that are a little bit more food savvy, Biryani is like a rice lasagna but also a paella at the same time. You actually want the edges of the rice to crisp and if the bottom gets that way too, even better! Next time I do this, I'll use that paella pan that's been creeping in the back of my cabinet. 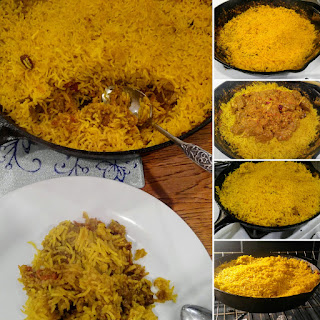 And for those of you who save recipe cards to do absolutely nothing with, here's my version of this recipe. Let me know if you want to see a different font next time. 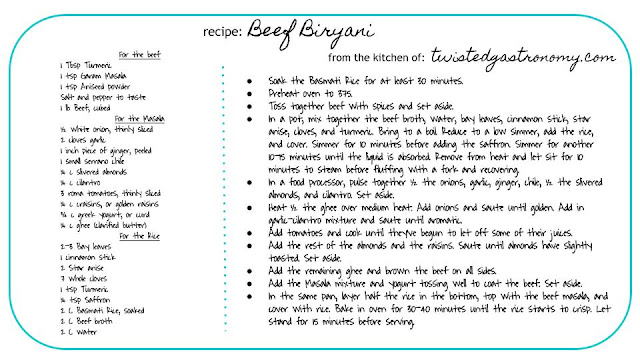